The forest pervades almost all aspects of life in Lapland. Picking berries and mushrooms, hunting, and fishing have all played central roles in the lives of the Sami, the settlers and their descendants.

The forest pervades almost all aspects of life in Lapland. Picking berries and mushrooms, hunting, and fishing have all played central roles in the lives of the Sami, the settlers and their descendants.  During the summer, domesticated animals were sent to graze in the forest and hay was harvested from its marshes. Firewood provided warmth and other timber was used to build homes, storage and stables. It was the forest that enabled people to live in this northern region.

When Sweden began to develop from an agrarian society to an industrial one, the forest’s economic value grew. Between the end of the 1800s and 1960, forestry and related industries were the main source of income for many.

Timber was cut during winter and floated down the watercourses of the spring thaw to the Umeälven river. From here large floating convoys of logs were sent further downriver to sawmills on the coast.

To encourage settlement of the north and ensure the availability of manpower to work the forest, the state developed a system of small land ownership where payment was made in the form of work within the forest industry. Tree felling, their transportation downriver and production of charcoal was labour intensive. Large saws were used to fell the trees, which were then moved through the snow-clad landscape by horse and sled. Men were often away for most of the winter while the women were left to look after the smallholdings and their animals and with the childcare. Their days were long and arduous too. 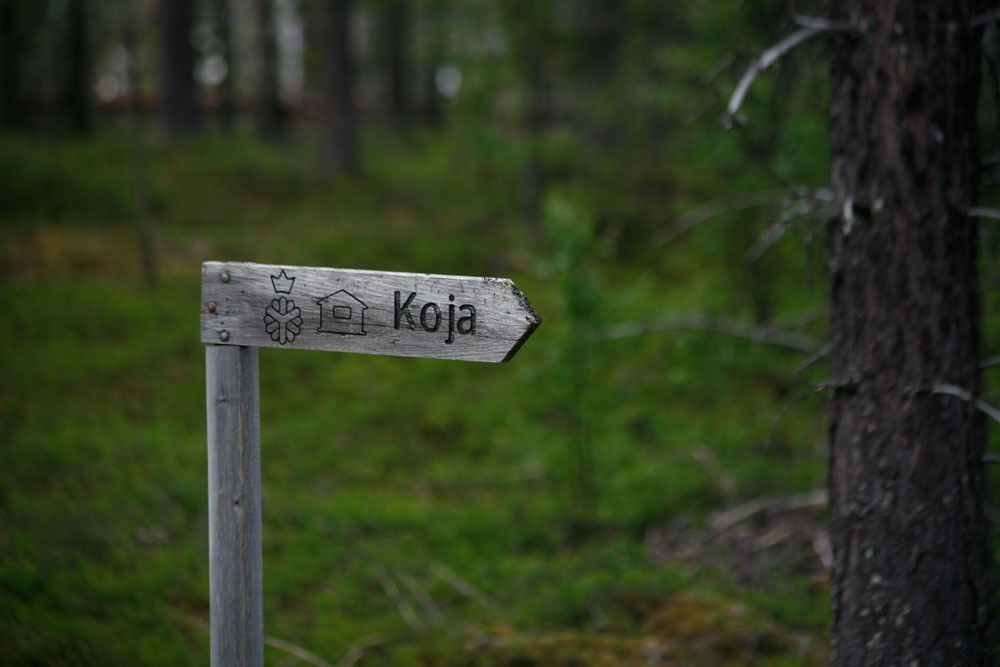 Through the 1950s and ’60s, the forestry industry was gradually mechanised and most of the smallholdings abandoned, although many have since been converted into holiday/weekend cottages. The Pauträsk, Blåvikssjön and Grundfors triangle is an area rich in this type of settlement and, thanks to the existence of an extensive network of gravel tracks created by the forest industry, there is much that is easily accessible and available to discover.

Paubäcken – a northern stream
The large stream, or small river, Paubäcken is typical of the northern Swedish watercourse that was used to transport timber. It still bears remnants of that time along its route; from dams to cabins to paths.

In Pauträsk, it is easy to reach the riverbank where you can find a worker’s cabin, log fire ring and a dam with a bridge stretching across the water. Parking is available on both sides of the dam. A path leads east from the cabin and follows the course of the river to a former mill site.

Fishing in the River Paubäcken is divided into four sections. Pauträsk FVO covers the outflow from Lake Pauträsk, SCA Hedmarks follows from there and leads into Sveaskog until Pausele/Bäcknäs takes over and includes sections of the River Umeälven.

Paubäcken is well known for its pure waters, which are also home to colonies of the super rare (and therefore protected) freshwater pearl mussel, making Paubäcken recognised as one of Europe’s best homes for these creatures. Do remember to respect them and their environment by being careful where you put your feet and not disturbing them.

Mejvanheden – for excellent fishing
There are several shelters along the course of the river, one of which is located next to a protected spruce on the east bank, where the river flows near the main road.  On the west bank is an old forestry worker’s cabin and log fire ring.

A kilometre further downstream is another shelter standing next to a restored cabin and only a stone’s throw from the river. Trout and grayling fishing is good here but you need to purchase a Sveaskog fishing permit first. 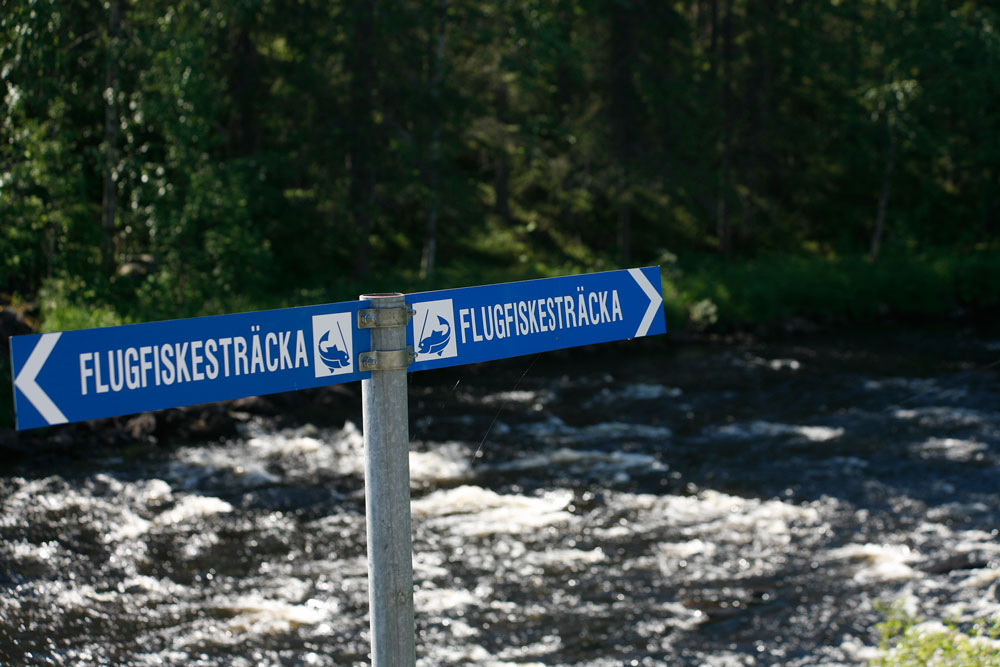 The area has been designated a National Interest Site within the category of Heritage Environment. This means that there are still traces of previous activity affecting the environment and they are to be protected. The old method of using marshes to grow hay can still be seen. In the 1800s, to control water levels in these areas, a water channel was dug by hand between Paubäcken to Utgrävetjärn. Today you can enjoy a pleasant walk alongside this same channel.

Stormyrheden – historic walk.
Beside the road is a lumberjack’s cabin and a preserved horse-drawn timber sled. A 1km path leads to Paubäcken passing hay marshes and watering channels before terminating at the bridge over the river. Further north are a shelter and suspension bridge located next to the power lines.

Buberget – lichen and ancient forest
The ecologically certified Jovan Ekopark includes the Buberget Nature Reserve, the mostly northerly home of wolf lichen. The forest is characterised by widely spaced birch and spruce and holds traces of several ancient forest fires. You can still the charcoal remains of one which took place in1900 and is thought to have been started deliberately because of the need to improve grazing. Many of the trees we see today have grown up since then. The Buberget marshes contain many dried up Douglas firs that died in the fire.

A road through the nature reserve ensures easy access to the fascinating flora and fauna. One shelter worth a visit is beside the Jovanbäcken river. A stairway takes you down the steep and stoney slope to both river and shelter.

Mejvanbäcken – for paddlers and anglers
The river flows from the Mejvanhede marsh to the Umeälven just downstream of Grundfors. It twists and turns through spectacular forested terrain and contains good stocks of trout and grayling and, if you’re really lucky, you might also catch sight of a beaver. 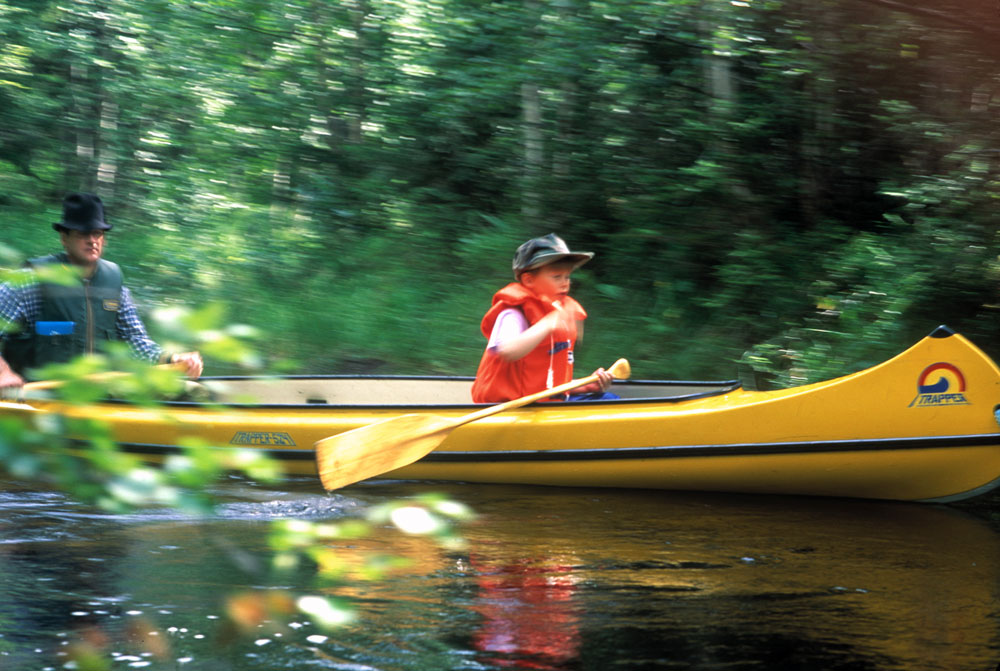 The river is easily navigable by canoe before it enters the Umeälven. If you are a little unsure about paddling along a swift stream it is easy to stop. Look out for the cemented timber channel just before you reach the Umeälven  – this MUST be avoided. Just pick up your canoe and walk around it before entering the river again. 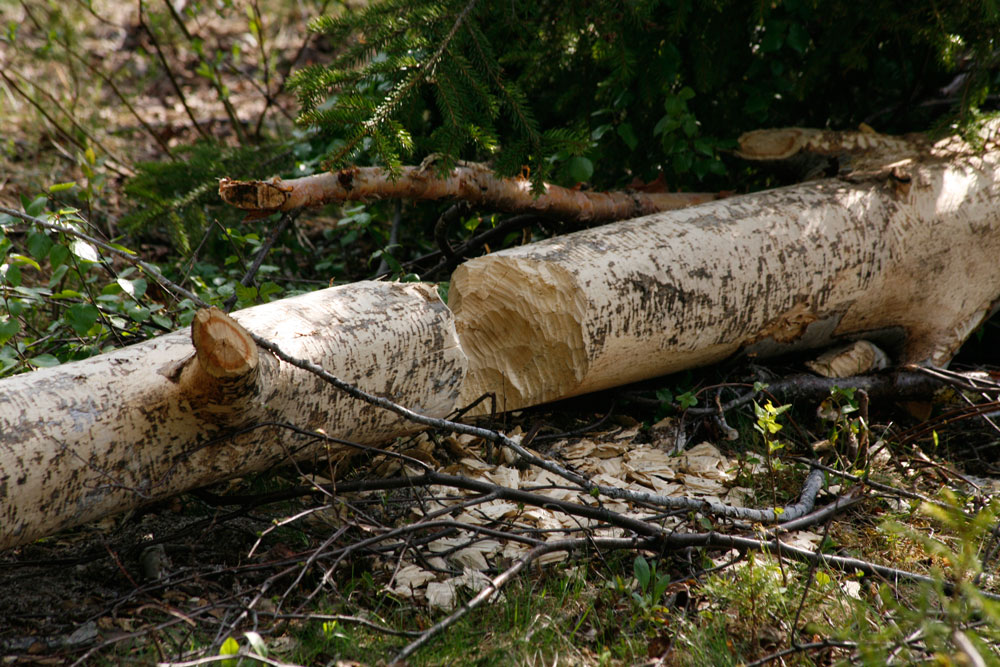 There are as many places to start or finish a paddling trip as there are forestry gravel tracks providing easy access.

This website uses cookies to improve your experience while you navigate through the website. Out of these, the cookies that are categorized as necessary are stored on your browser as they are essential for the working of basic functionalities of the website. We also use third-party cookies that help us analyze and understand how you use this website. These cookies will be stored in your browser only with your consent. You also have the option to opt-out of these cookies. But opting out of some of these cookies may affect your browsing experience.
Necessary Always Enabled

Any cookies that may not be particularly necessary for the website to function and is used specifically to collect user personal data via analytics, ads, other embedded contents are termed as non-necessary cookies. It is mandatory to procure user consent prior to running these cookies on your website.